Shawn Kingzette of Davey's Northwest Chicago office explains when Japanese beetles will likely appear and what homeowners can do to deter these pests from making a meal of their landscapes.

Adult Japanese beetles vary from year to year in their severity.  The grub larvae can be killed in harsh winter but then wet spring conditions will cause more larvae to make it to adulthood.  It can be difficult to predict when they will be a problem.  They tend to show up before the 4th of July and peak right when our gardens are starting to look at their best and they can be around for several weeks doing their damage. They love lots of plants in the rose family such as crabapple, serviceberry, cotoneaster and roses.  They also like lindens, cherry, and birches.  For those that live next to farm fields Japanese Beetles love soy beans.  If the farmer next door is growing beans that year the Japanese Beetle problems will be worse.  They also like grape though not lots of people grow grape. 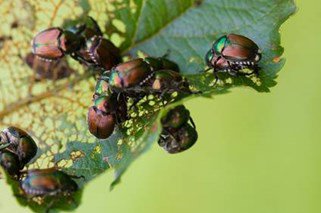 Japanese Beetles will make lacework of the leaves which then dry out and give the foliage a burnt look in the case of lindens and birch.  They will feed on rose blooms.  The problem can vary across the Chicagoland region even in the same year.  Some areas will be very quiet and other areas will see lots of damage.

Irrigated lawns are more attractive to the adults as it is easier to lay their eggs in soft soil versus harder dry soils.  As a turf problem we tend to see it more in irrigated lawns than non-irrigated.  That is why it is often a serious problem on golf course turf and ornamental trees.  Sometimes you can reduce Japanese beetle problems by not watering the lawn as much.

So the ultimate question is what to do about it?  There are systemic insecticides that can reduce the damage.  As the beetles feed on the leaves they ingest the insecticide.  It may not kill them but it can deter feeding as it tastes bad and causes them to feed elsewhere.  Systemic insecticides need to be applied well before the pest shows up to give enough time for the material to move up from the roots to the leaves.  It is important to note that some trees like lindens are not labeled to be used with some of the common systemic insecticides so alternate treatments are needed.  When the problem is severe foliar sprays are used to deter feeding.  It is important to spray in a timely fashion because once the damage has occurred we can't make the damaged leaves better.  It is suggested that these types of treatments be performed by professionals with proper pesticide licensing.

On smaller plant material it can be practical to wash them off with soapy water or to remove them by hand into a bucket of soapy water.  It is not suggested to use the Japanese beetle traps that they sell in garden centers and the like.  They have a attractant that brings the beetle to your property.  Yes it will kill some beetles but it will bring more to your yard.  If you don't like your neighbor then hang it in the far side of their yard to pull the beetles away from your prize roses.

Weathering the storm: Experts share tips on how to protect vulnerable trees from damage

In this News Channel 5 Nashville segment, Rob Kraker from Davey’s Southeast Nashville office talks about what to do with frost damaged trees.
Read More
Back to Newsroom