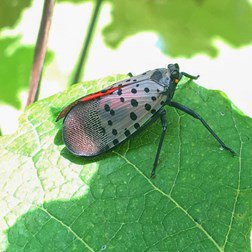 The spotted lanternfly (SLF) is an invasive insect that entered North America from China through imported wood products. It was first identified in Berks County, Pennsylvania in September 2014. Since then, it has become firmly established and is rapidly spreading throughout the continent.

Spotted lanternflies attack trees, wood, and timber, primarily Ailanthus altissima (tree-of-heaven). The insects are easiest to spot at dusk or night when they migrate up and down the trunk of the tree. 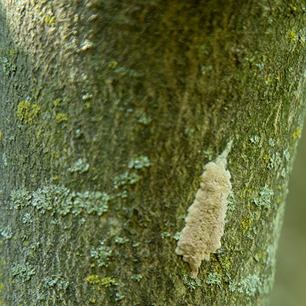 During the day, spotted lanternflies tend to gather near the base of the plant or in the canopy, making them hard to see.

The most noticeable symptoms of the insects are wilted tree leaves and sooty mold, a fungus that gives tree leaves and branches a black, grimy appearance. If severely affected, a tree’s foliage may be wilted, and the trunk or branches may have open, oozing wounds.

These insects secrete a sugary substance called honeydew as they feed. This honeydew can attract wasp and bee populations and encourages the spread of sooty mold, which can stunt the growth of trees and other plants and can also transfer to any other objects or surfaces near the infected plant.

Spotted lanternflies primarily move through human-assisted means. Female spotted lanternflies lay their eggs on vertical surfaces such as tree trunks, planters, and the sides of buildings. If laid on mobile surfaces, the eggs can be transported to new breeding grounds. 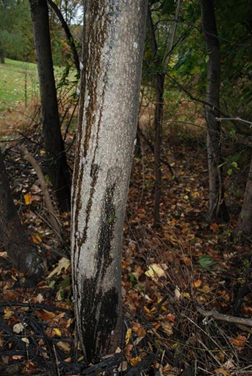 The first line of defense against spotted lanternfly infestation is early detection and monitoring. In 2018, Davey Resource Group (DRG) was contracted by the state of Delaware to proactively inspect for spotted lanternflies in target areas.

Once the insect has been detected, the experts at DRG work with stakeholders to recommend the best approach for treatment, including herbicide or insecticide application to control the spread of spotted lanternflies. Education on human-assisted movement and what to look for are fundamental to increased awareness and ultimate control of the spread of this destructive forest pest.

Contact Our Team To Learn Which Trees Are Most Vulnerable To Spotted Lanternfly & To Find Out Which Treatments Are Most Appropriate In Your Area.