Spotted Lanternfly: What You Need to Know

Spotted lanternfly has been in the U.S. since 2014 with no sign of leaving soon. With early identification being so critical to an infested tree’s survival, here are some need-to-know facts about this pesky invasive. 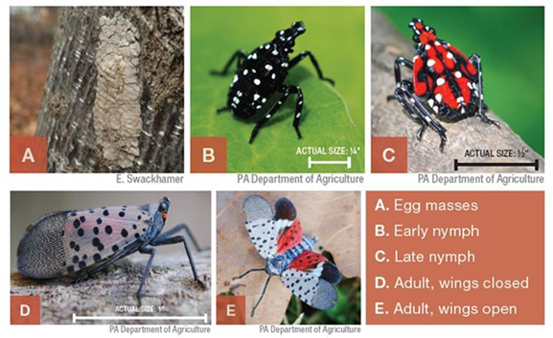 Spotted lanternfly (Lycorma delicatula) is an invasive insect that is native to Southeast Asia. It was first discovered in Pennsylvania and has since spread into Delaware, New York, Virginia, New Jersey, Maryland, and most recently into Ohio. Its preferred hosts are Tree of Heaven (Ailanthus altissima) and Grapes Vitis spp., but it also feeds on Maples Acer spp. and up to 70 other hosts.

Infected host trees are the first visible sign of spotted lanternfly infestations. Common signs of an infestation include leaf wilting, leaf curling, sap spilling from tree wounds, and branch dieback. In addition, these insects produce a clear, sticky liquid called honeydew. Other pests like ants and wasps are attracted to honeydew, so a heavy presence of those insects can also be a sign.

If a tree has any of those signs, the next step is to look for egg masses. Spotted lanternflies cover their egg masses with a protective coating that looks like a clump of whitish-brown mud. They are deposited on almost any flat surface, including non-plant surfaces like vehicles, rail cars, campers, and outdoor furniture. On a tree, they are most likely found on the trunk.

Egg masses hatch in May, and young spotted lanternflies have four nymph instar stages. The last instar is bright red and reaches adulthood in July. Adults are large, about 1-inch long and ½-inch wide, and are easy to identify when they are flying because of the bright red markings on their wings. Adults are active between July and September and then lay eggs in the fall. While adults are able to fly, they are primarily transported through egg masses that are attached to vehicles or firewood.

Spotted lanternfly adults and nymphs have piercing/sucking mouthparts that are able to pierce bark and are inserted into phloem vessels where they feed on sap. The insects are very destructive to grape vines, fruit trees, and ornamental trees. Heavily infested trees and vines leak sap that causes a reduction in plant vitality and potentially leads to its death. The leaking sap and honeydew that is created attract bees and sooty mold which grows on the honeydew and impacts fruit crops. The honeydew and sooty mold can also build up causing a sticky mess on cars or patios. According to economists at Penn State University “If not contained, spotted lanternfly could potentially drain Pennsylvania’s economy of at least $324 million annually.”

The best bet to stop an infestation is to report a sighting to your state’s Department of Agriculture.

If You Suspect Spotted Lanternfly Has Infested Your Property, Call Your Local Davey Resource Group Office To Discuss The Signs Of Infestation & Discuss Management Approaches.