Nature does more than affect our physical health. We know that access to trees and green spaces improves cognition in the elderly, improves mental health in college students, and is equal to medication in its effectiveness for symptom control in children with Attention Deficit Disorder. Studies have shown that nature exposure reduces trauma responses in children and in veterans. Connection to green space has been shown to decrease symptoms of depression and anxiety and improve ACT scores and college readiness. 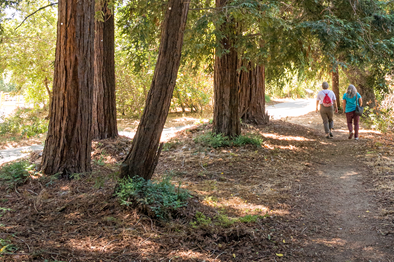 The statistics around mental health, especially depression, are shocking. Over 17 million adult Americans have a major depressive disorder; 330 million people worldwide are affected. Likely these numbers are higher as many people don’t seek treatment for depression, with one study suggesting that such cases are underestimated worldwide by a third. The World Health Organization lists depression as the primary cause of disability on a global scale. Women are affected more than men, but men are far more likely than women to succeed in a suicide attempt. Of those individuals that receive treatment and take medication, about 28% stop their medication within one month, and 44% stop within three months, largely due to medication side effects.

Urban life increases the risk that an individual will suffer from a mental health diagnosis. We see that the positive health impact of urban greening is greatest in lower socioeconomic areas where the deficits of green space are highest. A study done by ER physician and nature researcher Dr. Eugenia South, et al., in Philadelphia is the first randomized, controlled trial to perform such a study in the field of nature and health. Researchers looked at 110 blighted vacant lots in areas of Philadelphia and randomized them into one of three groups:

“Stable” community members in the area—members of the community who weren’t frequently moving—were interviewed for 18 months before the intervention and 18 months after the intervention. They were assessed for depression and self-reported “poor mental health.”

What did the study find?

The study found a statistically significant reduction in the amount of depression found in community members who resided close to the greened lots, but no change in those who lived near lots with no greening, and no change with those that lived near the lots that had been cleaned, but not greened. The reduction in feeling depressed in the people living next to greened lots was astounding—a 41.5% reduction and an even higher 62.8% reduction in self-reported poor mental health.

Why is this important? It showed that a low cost, easy intervention could have an impact as profound as placing people on medications for depression—without any of the adverse side effects. Similar studies have found that increasing green space also leads to decreases in crime and violence in affected communities. By greening a community, a small investment could rapidly change that community’s health landscape. We see the positive health impact is greatest in areas where the deficit of green space is highest—lower in socioeconomically disadvantaged areas.

Our world is in turmoil. But as we begin to process the chaos around us, increasing all populations’ access to nature could be a strategy for communities in their long-term planning for chronic trauma, not only from COVID-19 but also from more chronic societal stressors. Strategic design of communities’ green space could have major impacts on public health. One thing we do know—for any benefit we see, those who are most vulnerable often have the greatest benefits with these changes.

Dr. Jennifer Wisdom-Behounek, M.D., is board certified in Family Medicine, with 10 years’ clinical experience. She has a particular interest in how lifestyle and nature affect health.