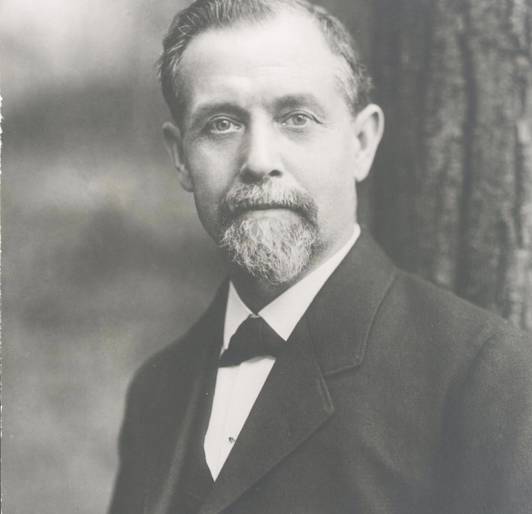 "Do It Right Or Not At All"

In 1846, John Davey was born in Somersetshire, England, to a farm manager and a dressmaker. It was here he would learn perhaps the greatest lesson of his life, “Do It Right or Not At All,” a lesson he learned from his father during his first planting – a young boy’s modest crop of potato plants. During his youth in England, John devoted himself to intense study of two subjects: agriculture and Christianity.

In 1873 John emigrated from England to America, where he continued his studies of trees, plants and theology briefly in Warren, Ohio, before settling in Kent, Ohio. In 1880 John founded The Davey Tree Expert Company on the basis of his research and practical applications of tree surgery. John believed the health of a tree, like that of a human being, could be maintained through scientific means.

In 1901 John published his seminal work on tree care, “The Tree Doctor,” which helped educate the general public on the concept of caring for and saving trees. The methods outlined in John’s book would help give rise to the modern-day industry of arboriculture. And it cemented his position as “The Father of Tree Surgery.”

The business grew as large estate owners in the East, particularly in New York, contracted with Davey Tree to care for their sprawling landscapes. Early clients included George Eastman, of Kodak fame, the Rockefellers, the Colgates, the Archbolds and more.

Demand for Davey Tree care services grew so quickly that, in 1909, the company founded the Davey Institute of Tree Surgery to train arborists in the Davey method of tree care. Hundreds soon graduated from the school and applied John’s many patented methods in caring for client’s trees.

Throughout his life, John was admired by many environmental activists and others who simply shared his passion for preserving nature. The famed essayist Elbert Hubbard penned “A Brother to the Trees” in 1909, celebrating and paying tribute to John’s work.

John remained active in his namesake company, serving as president until his death in 1923 at the age of 77.

Let's Find What
You're Looking For!
Quick Links